When looking for the best cookers under £1,000, one thing really jumped out at me.

For £1,000 you’re pretty much getting everything you can possibly need from a cooker, at least, a domestic cooker that is.

There were few limitations on brand and as you will see below, I’ve picked out some of the biggest brands in the industry, including Rangemaster, Stoves, AEG and Belling. In fact, I could have included many more that were adequately appropriate for this article.

The tough thing about finding the best cookers for under £1,000 is the fact that there were so many to choose from. At this price point I’m not sure that there are any stones left unturned and personally, I think you’re going to be able to fit most briefs.

What I will say at this point is that with this budget you’re at a huge advantage for domestic cookers. I’m pretty confident that no matter what brand you’ve bought into and regardless of your kitchen style, you’re going to be able to find a perfect fit. 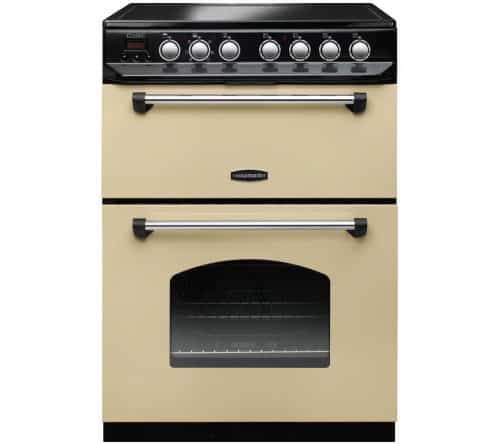 Not everyone has the space or need for a range cooker, so Rangemaster put their expertise behind this charming 60cm cooker, simply known as the Classic 60 Electric. Incredibly, this cooker’s price is as attractive as its cream and chrome exterior, coming in well under your £1,000 budget. 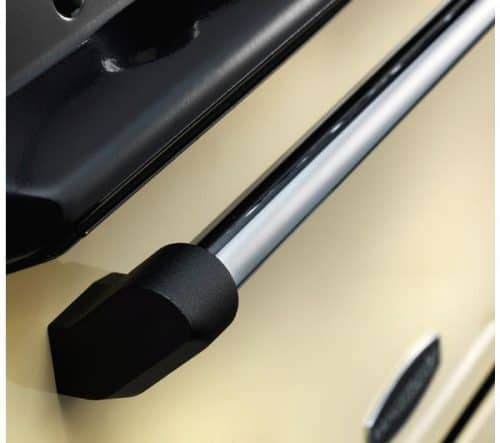 The ceramic hob houses four electric heating elements that are thoughtfully arranged with one large and one small element up front. I’m most disappointed with the Classic 60 Electric’s knobs, which are difficult to read and feel cheap compared to the rest of the cooker. Once set, however, these heating elements reach temperature quickly and consistently.

This handsome cooker features two ovens with over 90L shared capacity. Enjoy the versatility of a multifunction main oven and conventional secondary oven, both with catalytic liners. Both ovens also function as full-width grills for even more variety. As you would expect from electric cookers, the Classic 60 Electric’s ovens are fast and accurate with helpful functions like Fan-Assisted Grill and Defrost.Although the main oven’s arched baker window is a large part of this cooker’s appeal, it’s quite small. It’s difficult to see dishes even with the oven light on. Still, any home cook would be proud to have the Rangemaster Classic 60 Electric in their home.

With the looks and practicality of a range cooker, but without the size, the Rangemaster 60cm Electric is about as good as you'l find for this size. It comes in several different ...

Like the Classic 60 Electric, the Professional 60 Gas Cooker is a 60cm Rangemaster for those who don’t need or want a large range cooker. Get all the quality construction and premium features you expect from Rangemaster for a fraction of the cost and in a size that fits your lifestyle. 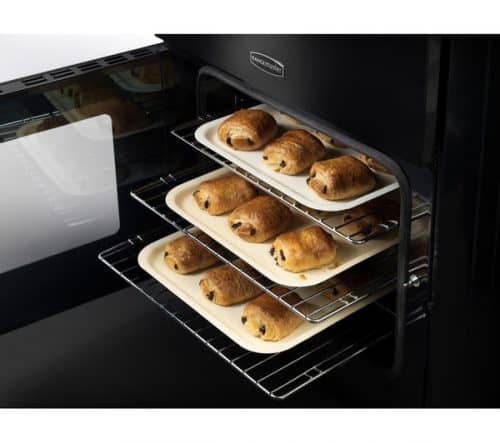 The Professional 60 Gas Cooker’s four gas hobs are the stars of the show, coming complete with thick, sturdy cast-iron pan supports and non-stick griddle. Manual ignition is an annoying caveat, but once lit these burners are highly precise and almost never go out. That’s even true of the extra-large wok burner, which is notorious in lesser cookers for losing its flame.

Despite using gas, the Professional 60 Gas Cooker’s two modest ovens cook thoroughly and evenly. The 41L main oven is fan-assisted while the conventional 17L secondary oven doubles as a grill. One of my favorite functions is Slow Cook, which you can use to make stews and other slow-cooked meals at a steady 100°C. Of course, these ovens are tiny compared to some of the others on this list, but are perfectly sized for small families and singles.

The Rangemaster Professional is the modern version of the Classic. Drapped in stunning looks, this cooker is the best of the best when it comes to 60cm Gas cookers.

Packed with user-friendly features, the classic Stoves Richmond 550DFW is my choice for best dual fuel cooker under £1,000. Starting with a spacious 59L main fan-assisted oven and 35L secondary conventional oven, this cooker is ideally sized for large and mid-sized families alike. Both ovens use enamel liners that can be wiped clean for easy maintenance. Sadly, oven doors suffer a design flaw that leaves them sharp. Be careful with loose clothing and bare skin when opening these oven doors.

Other gas cookers come with glass lids, but the Richmond 550DFW uses a steel hob lid instead. Not only does the steel lid look great, but you don’t have to worry about cracking it like a glass lid. Underneath the lid are four gas burners topped by heavy-duty cast-iron pan supports that don’t rattle against you cookware. Unfortunately, ignition is manual, but at least gas is automatically shut off when the lid closes for extra security.

Modern cookers give you a range of cooking options and the Richmond 550DFW is no different. The secondary oven converts into a grill when needed, and the gas hob includes a wok burner. Although some customers are upset because this cooker lacks a grill pan handle, the Richmond 550DFW still deserves your serious consideration.

The best looking cooker on the market? We think it's right up and the fact that the Stoves Richmond 550DFW comes in at well under budget, fantastic value for money.

If you have a large family but limited space in the kitchen, the AEG 49106IU-MN Electric Induction Cooker was made with you in mind. Wasting not a single centimetre, this 60cm cooker manages to fit both a 72L main fan-assisted oven and 39L secondary conventional oven.

This is made possible because all knobs have been removed, leaving more space for the ovens. Buttons for both the induction hob and the ovens can be found on the hob itself. These buttons are arranged well, leaving plenty of space between them and the four induction elements.

With so much space you can cook entire meals in one pass, utilizing both large ovens and all three sizes of induction burners. Triple-paned oven doors improve this oven’s efficiency, keeping all the heat inside and the exterior of the cooker cool. Induction burners are also fast cooling, ridding themselves quickly of residual heat from cooking.

Both ovens come with catalytic liners which absorb grease and wipe away clean without any added steps. The stainless steel exterior is similarly easy to maintain so you can keep this cooker looking great for years to come. My only major complaint is that the secondary oven’s grill function takes a while to heat up, and doesn’t always cook food evenly. If you depend heavily upon grilling your food, this small issue could be a deal breaker.

If the Star Ship Enterprise did cookers, this is what it would look like. Super modern, great practicality and works within any high-end kitchen.

Where to start with this remarkable 100cm range cooker? It has everything a discerning home chef needs and more to satisfy all their culinary curiosity. Equipped with sevengas burners and three oven cavities totalling an incredible 163L capacity, the Kensington 100G is an uncompromisingly dashing cooker with endless functionality.

Starting with this cooker’s seven manual ignition gas burners, there are four separate sizes including the extra-large wok burner. This allows you to have total control over the size of the flames and the temperature of your food. Cast-iron pan supports are both attractive and sturdy, providing excellent balance for pots and pans.

The Kensington 100G then features three ovens clad in enamel liners. The conventional main and secondary ovens are both 64L and feature large double-glazed viewing windows. The third cavity doubles as a powerful grill that gets the perfect crisp on sausages or steaks while the rest of your food cooks. Each oven has a wealth of shelving options and main ovens include two shelves each for your convenience.

While most parts of the Kensington 100G feel built to last, the knobs are light and plastic-y. Some customers even report needing to replace them multiple times. The beautiful cream finish is also prone to staining, so be sure to clean up messes right away. All things considered, this gas cooker still easily makes my list of the best cookers under £1,000.

The daddy! The Belling Kensington 100G is an absolute monster, but a classic as the same time. Absolutely everything you could ever need from a cooker all in one package.

It’s been great fun writing this article and forming my research on the cookers that I’ve mentioned above. Working out what each of the cookers do well and also what they struggle at, has highlighted just how good they are.

Whilst that was going to be another article that I planned to write, creating this article has actually made me decide not to write it…. just yet, anyway.

You see, I think for £1,000 you’re getting everything you could possibly need from a cooker. You get choices of the best brands, you can choose from multiple cookers, you can have your picks of hobs, the ovens come with an abundance of features and just generally, the cookers mentioned above are pretty faultless.

You’re able to spend a lot more on a cooker, but I really don’t think that the majority of people need to.

Whilst this is a generalisation and I realise that these cookers aren’t perfect, with perfection being something that’s often subjective, they aren’t far off.

I will complete the said article at some point, but one of the goals for setting up CookerBase.com was to offer independent and impartial advice. I’ve no affiliation with any brand so I just say it how I see it.

At the minute, I think for £1,000 you’re not only getting great value, but a cooker that is packed with features and will likely last you 7, 10, maybe more years.

If you think I’ve missed something off this list or if there is something that you want answering regarding any of these products, drop a comment below and I’ll get back to you ASAP.

Best Cookers for Under £600

Paul has been working in the electrical and large-appliance industry for over a decade, alongside some of the biggest manufacturers in the world. Whilst taking on his own kitchen renovation in 2017, he saw that there was a lack of quality cooker reviews and took it upon himself to make it his job to create a site that offered in-depth and independent advice for other potential consumers.

Related Articles
We will be happy to hear your thoughts

Cooker Base is a participant in the Amazon Services LLC Associates Program, an affiliate advertising program designed to provide a means for sites to earn advertising fees by advertising and linking to amazon.co.uk.